What do you and other members of your community bring to your Shared Purpose?

Your contribution connects Path to Purpose with your products and services in a way that is authentic and powerful. Discover what you bring to the table, and what space you should leave for others to contribute.

What do you bring to the table?

Think of Shared Purpose as a dinner party. Contribution is the dish that you bring to make the feast complete.

When your story starts with your product, everything is about what you can do for others. It’s like a full-service restaurant. Just show up, enjoy the meal and pay the bill.

But when your narrative starts with your purpose, things need to be more reciprocal and multi-dimensional. Everyone has something to contribute.

Contribution describes what everyone brings to the Shared Purpose feast.

Everyone knows the Nike slogan: “Just Do It.”

Nike is the Greek goddess of Victory, and the Nike 'swoosh' reflects her wings. Victory is Nike's shared purpose.

What makes the "Just Do It" slogan so powerful is that in three words it captures three different elements: Shared Purpose, Path to Purpose and Contribution.

Nike's Path to Purpose is using cutting-edge design to outfit athletes and "inspire the athlete in all of us." But they can't win the race for those athletes.

Starbucks’ contribution connects directly to the concept of third place.

In effect, Starbucks is saying “We’ll provide the coffee, comfortable couches, and wi-fi. You provide the conversation, connection, and community.”

If their contribution is a third place to spend time between home and work, it explains why Starbucks' “Race Together” initiative was a failure.

Starbucks wanted to promote a dialogue about race relations, which makes sense in the context of their Shared Purpose “to inspire the human spirit.”

The problem is that the program encouraged people to talk to their barista about race while their coffee was being made. This steps over that Starbucks had no obvious credibility to talk about race and picked the wrong role. It’s not appropriate or natural for an employee to briefly discuss race as they hurry to make drinks. Starbucks hoarded its purpose.

What could Starbucks have done instead? Starbucks could have stayed true to its Path to Purpose of being a third place by inviting others to “wear the T-shirt” of its Shared Purpose.

For example, they could have closed an hour earlier on the first Monday of the month, partnered with organizations expert in facilitating conversations about race and served free coffee to anyone who joined the conversation.

That way Starbucks would have still made its contribution of coffee and third place by being a gracious host and creating space for more natural conversation.

Think about your Shared Purpose as a dinner party where everyone brings a dish. What contributions are necessary to make the feast a success?

Identifying other stakeholders in your orbit and what they each bring to the party helps you see the entire system of what it takes to fulfill your purpose.

Use the following worksheet to capture each stakeholder’s contribution.

It’s fine for each stakeholder to have multiple contributions. Just be sure they’re as specific as possible. 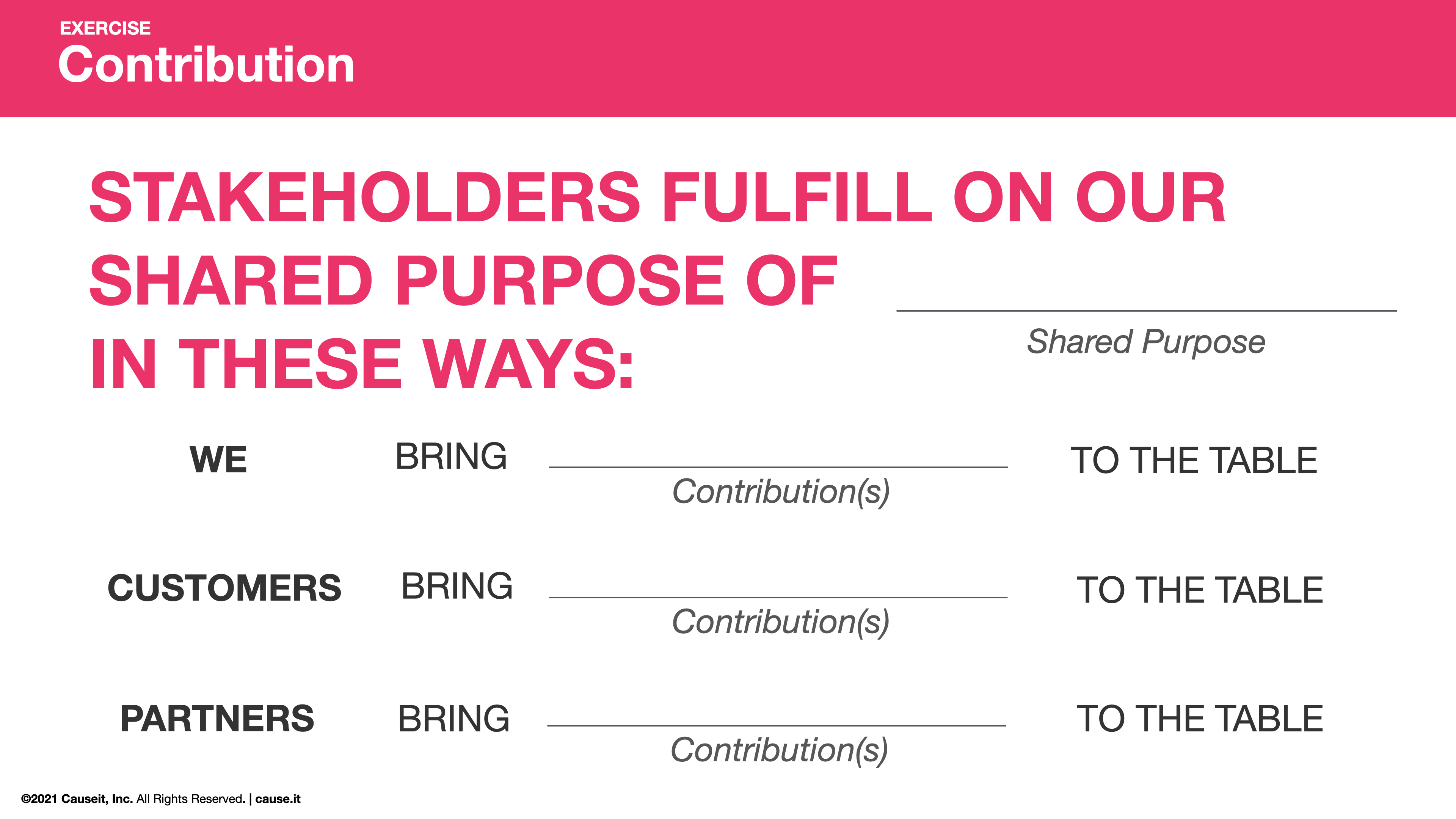 What do you and other members of your community contribute to your Shared Purpose?

Previous
Path to Purpose
Next
Relationships